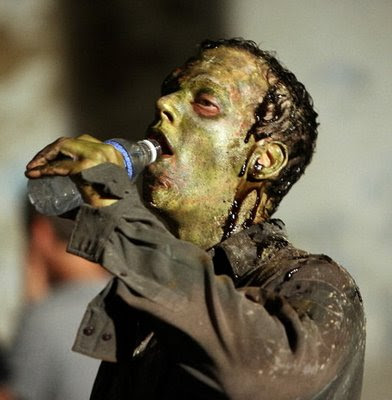 This is a post I wrote a year ago for Comedy.com. A friend asked me about it a while ago so I reposted it here. Enjoy

We all go through life a little clueless. Sometimes we don’t learn things about ourselves until they’re brought to our attention. For example, what if you’re the loud guy at the party. But you’re really not aware of it until a few friends bring it up over dinner. You’re shocked, embarrassed but now aware and can remedy the situation.

Now imagine your a Zombie. It’s an awkward social dilemma, in most part because your friends are less likely to bring it up. Probably for fear of your reaction and the chance they would be eaten. So how do you know if you’re a zombie? Here are 10 signs you could be the walking dead

10. You Died Recently – Think back, did anything drastic happen to you lately? Car crash? brutal attack? Bite from someone who may or may not have been dead? If so, and you’re still walking around then you could be a zombie.

9. Really Bad Body Odor – Deodorants and expensive soaps just not cutting it? Do you find that you’re putting on extra perfumes or colognes to keep from offending others? There really is nothing strong enough to battle the stench of decaying flesh. If this is the case you could be a zombie.

8. Inability To Run – Having problems on the treadmill? Find yourself doing a 30 minute mile? Is it even hard to keep up with the elderly people on the sidewalks? This could be caused by the deterioration of leg muscle and hardening of tissues. This could be the reason for your shambling gait. If you’re unable to chase down even the smallest of children, you could be a zombie.

7. Appearance Problems – Do you exhibit signs of physical decomposition such as rotting flesh, discolored eyes, open wounds, exposed bone, green skin, or loss of hair? If you’re experiencing any of these symptoms please consult your mortician. You could be a zombie.

6. Inability to Speak – Conversations getting more and more difficult? Do you find sentences being reduced to one or two words? Is it easier to grunt or moan rather than express your true feelings? If so, you could be a zombie.

5. Lack Of Sleep – Instead of being nuzzled up in bed, do you find yourself walking the streets all hours of the night? If it’s 3 am and you’d rather be causing terror in a park than catching 40 winks, you could be a zombie.

4. New View On Movies – Do you suddenly catch yourself cheering for the ‘other guys’ when watching Night of the Living Dead? You could be a zombie.

3. Inability To Be Killed – Are villagers having a hard time killing you? Can you only be destroyed after having your head removed? You could be a zombie.

2. Wardrobe Malfunctions – Have you been wearing the same clothes for weeks or maybe months at a time? Think about it for a second, was this the outfit you wanted to be buried in? Are they now just a shredded mess of fabric hanging off your rotting bones? If so, you could be a zombie.

1. BRAINS! – Find your diet has changed? Is gray matter the first thing you look for on a menu? There is no doubt about it, you’re a zombie.

The Time I Was Kicked Out Of McDonalds Over CheesePrevious Article