Coming Out Of The Closet Will End Homosexuality 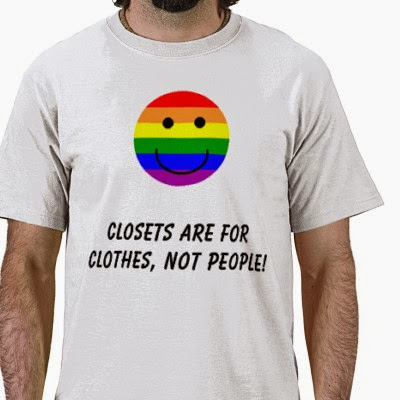 Last week I’d learned that someone out there, all Doctor-ish and such, had discovered what is being penned the “Gay Gene”. I won’t enter this debate due to my limited knowledge of science, DNA, Genes and what-in-the-hell-do-woman-want education. I will disassociate myself from my homophobic upbringing and my desire to refer to things as “gay” because part of me will always find that word funny. I will look at this through eyes I developed over years from educated opinions, extreme open-mindedness and interaction with dozens of awesomatic homosexual people I’ve interacted with in my life.

But the biggest reason I’ve evolved to be far more accepting to other people’s lifestyles was how my stomach painfully turned when listening to ignorant-filled hate my friends and family spewed when talking about homosexuality.

The smaller their minds got, the bigger mine became. But I also noticed something very interesting about a few of the people who seemed to hate homosexuality the most, they themselves were pretty gay.

As a child I watched Duke of Hazzard. But I felt horrible for doing so, so horrible that I started a personal campaign for others to know how much I hated the show. I became a closet Duke of Hazzard fan. But even my closest friends had no clue of the truth.

So I have an inkling of the pain a self-loathing homosexual must have. So embarrassed of what you are that you make an effort for everyone six feet from you to know you’re not.

To live a lie and inadvertently add to the gay problem.

Now we go back to the gay gene. If this is so, it’s pass from generation to generation. Which can only mean gay people are making more gay people. Now again, I’m not a doctor but I don’t see how two penises can do this. (or two vaginas)

So people, listen to me now. If you’re so hell-bent to end homosexuality, the best way to do this is to 100% embrace it. Let anyone who wants to be gay… be gay.

If people are no longer afraid to be gay then they won’t be forced to marry women, have children, have a wide stance in a public restroom.

If you’re free to be gay… you won’t breed. You’ll adopt babies from other countries and raise them on HGTV.

Before you know it the gay gene will be the way of the Dodo.

Which was the gayest of all birds.

Finding Old Slides In A Box. Best Find Of 2014Next Article