Is Boba Fett the Absolute WORST Character in Star Wars? 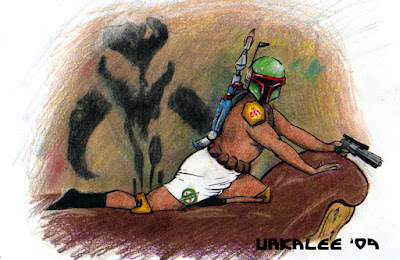 First off, you’re going to hate reading this post as much as I hate writing it. It’s because my favorite character in the Star Wars universe had ALWAYS been Boba Fett. It was my favorite toy growing up. I used to write personal fan-fiction stories about him as well and hide them under my bed so my brothers wouldn’t find them a ridicule me.

I’ve always kept a close eye on him through life. I sat a little taller when he came on the screen. He was my guy. So this is why it was so painful to notice a few things over the years that made me realize that he may be the worse character in the Star Wars story itself.

Let’s talk about when we first see Boba Fett (before Lucas screwed up on the second round of edits). He’s on board Darth Vader’s ship among other Bounty Hunters. Oh wait… no… not true. He actually was first seen animated in the dreaded Star Wars Holiday Special.

He rides a dinosaur, but basically verbally and physically abuses them. Not cool man, not cool. When he’s discovered to be bad, he runs away from a group of unarmed rebels.
So NOW we’re back on the Empire. He has one job, get Han Solo by the orders of Darth Vader. But wait, he already had this job for Jabba the Hutt. So now we have a guy who’s double dipping bounty rewards. What a dick. Right?
Mark… set… go… he’s off to find them. How does he do this? He hangs out in the garbage. Seems creepy but, alright. Han and the gang take off, he follows quietly all the way to Bespin. Boba is known as one of the galaxy’s deadliest bounty hunters, and he proves is by calling for back up when he gets to Cloud City. Instead of getting Han alone, he alerts the Empire to do it for him. Essentially only qualifying for a finders fee. But who am I to butt in.
Side note, how did the Empire beat Han to Bespin? Did anyone do the math there? This leads me to my next theory where Lobot is Snoke… don’t get me started.
So, Darth Vader captures everyone, Boba watches and in return gets to take off with Han for a very undeserved reward. Boba is like that one guy at your job that watches everyone work, then takes all the credit.
We enter the next episode and we’re in Jabba’s lair. Essentially it’s hanging out in a friend’s basement because he has all the pot. Boba thrives. He walks around in his Mandalorian armor talking to alien chicks about his days of glory. Mandalorian armor that if you look at, really doesn’t fit him very well. It’s like the first time you wear your dad’s jacket and your hands don’t poke through the sleeves. What does he weigh? A buck twenty five?
Leia sneaks in and is in disguise, threatens everyone and Boba gives a nod. Essentially saying “I appreciate you not talking off your helmet, so I don’t have to either.”
Can you imaging the musk in there? It’s like hot-sick dug up from a musty-stump at Endor.
Now we’re in the desert, still latched on to Jabba in a desperate attempt to be accepted, rides bitch on the barge. All hell breaks loose and bam…
Fett gets rammed from behind and finds his jet pack has activated. So here’s where I really find him to be a little bitch. Have you never flown with it before? I mean, your dad fought off Obi-Wan Kenobi with it, you act as if you just found a spider in your sock drawer. You scream like a 3 year old girl and land in the sarlacc pit. To die a thousand deaths or something bitchy. 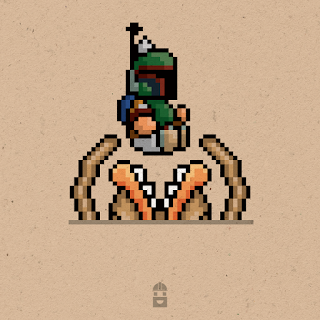 At least your Dad battling Jedi, you fell prey to a pothole in the sand.
So, with a heavy-heart I spew out the thought that Boba Fett was truly the worst character in the Star Wars Universe.
Let your anger flow through your comments.

9 Whole Minutes of our MoviePrevious Article