Living In A Ski Resort 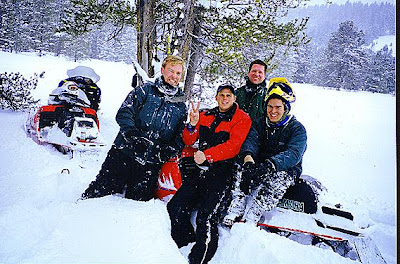 For a few years I resided in Sun Valley, Idaho. I moved there thinking I needed to escape from California as well as a complete reversal in climate.

Moving there I completely succeeded.

It was beautiful there, yet cold. Did I mention cold? When snow hit the ground in October it would easily stay until April. You learned quickly to drive in the snow. You learned to do everything in the snow.

I’ve been watching the news cover the Eastern weather and all I can think is “why don’t those idiots who can’t seem to drive in the snow just get an inner tube and just play for the day?”

Buy a snow mobile, get a snowboard, or even better… go out and get yourself some skis.

Obviously Sun Valley was known best for the skiing. I only lived a few miles from the base of Bald Mountain so people would always think of me when they were taking their ski holidays. Sure they’d pretend they wanted to see me but in reality they just were a little blown away by room prices at the lodge.

Living in LA you see about a third of the celebrities you’d see why hanging out at the Warm Springs lodge in Sun Valley. My friend Jeff and I would drink beers at the base and rub elbows which dozens of local and visiting celebs. Of course when I say rub elbows I mean we’d quiet drink our beers while trying to convince each other to go talk to one.

Though like everyone else, when you first move there you ski like a madman. Which in a few years you whine about the lift pricing and the lines and you only manage to ski when friends are in town. By then… you’re truly a local.

As much as I skied there, I never really got ‘good’. One of my last memories on the lifts I managed to take one a kid who couldn’t be more than 10. It was actually both our faults. He and I weren’t paying attention and slammed into each other. I did everything I could to take most of the crash and attempt to save the kid. It worked and he quickly got up and skied away. Did I add that he was laughing. I think I managed to make it back to the lodge on one ski and drink beers the rest of the day. Damn kids and their resiliency.

I miss living there. I had great friends and incredible times. I don’t miss trying to start my car in 15 below temps or digging out my driveway for 5 hours only to watch it be blanketed in snow again the next day. Hmmm.

I don’t think I could live in snow again.