The Office – UK vs US. And The Winner Is? 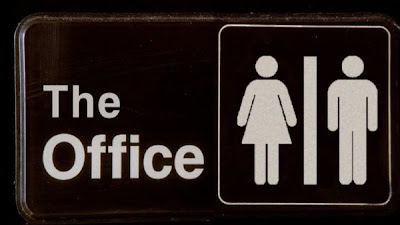 I’ve officially given up on NBC’s The Office, and for this I am sad. No one wanted this show to shine more than I. I was a fan of the UK version and was antsy in my pantsies from the moment I heard of the Americanized production. I followed each new actor as they were cast and eagerly awaited its premiere. I watched the first few season with a smile on my face and waited for it to finally click. Hope it would eventually find its way. It never did.

Now I don’t wish to come across as a snob who will never give an UK import a chance. Many of my favorite (favoUrite) shows from overseas have come to America in a western version and I’ve managed to be a fan. Although it’s unfortunate that some of the best UK shows never seem to make it past the first season, much less the pilot. A perfect example being The IT Crowd. Huge success overseas and imported to America with Joel McCale (The Soup, Community) as a lead was so misunderstood it never even aired. If you haven’t watched The IT Crowd (UK), it’s on Netflix instant play… make it so. I’ll wait.

So obviously I was uber happy when the US version of The Office had instant legs and managed to collect a healthy audience. Me being one of the many eyes who watched it each week.

But each week it got harder to watch. It was as if they were running out of ideas and felt introducing new characters each week might add some much needed flavor. Sadly saturating everything that was good about the original.

Now to its defense, British sitcoms are generally 6 episodes per season. Therefore it’s easy to stay focused on the plot and takes the onus off the writers to come up with crappy little side plots. You get 6 great episodes out of 6 in the UK rather than 12 great episodes out of 23 in the US. And if they are feeling sassy, the UK will sometimes throw in a 90 minute Christmas special. There really is a Santa after all.

So all that in mind, that’s not the entire reason why The Office has failed me. The biggest reason is the lack of using everything that made the original work. The characters. Here is what I mean. 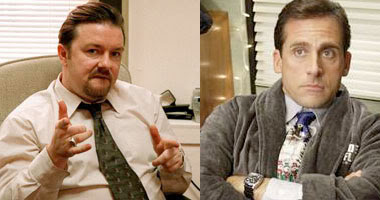 The moronic manager(s) of this half-hearted paper company. No one really knows how they achieved leadership in the organization and even more, how they maintain it. David Brent (played by show cocreator Rickey Gervais) and Michael Scott (played by Steve Carell) are fairly similar in their presentation. Both are idiots who are ultra-concerned about how they are perceived. They all resemble someone we’ve worked for in the past, we related to them and that’s why they work. But there is one major trait the US version omitted from their boss was Brent’s tendency to be a complete dick. David Brent was worried how others viewed him but it didn’t stop him from being a total ass in the process. Gervais took a big risk creating a character that you can could laugh at, and hate. Michael Scott only allows you to laugh and feel pity. Is pity a better emotion than hate? In my opinion no. Gervais was brilliant as Brent and though I would have hated to share an office with him, as an outsider I could watch him cause havoc everyday. 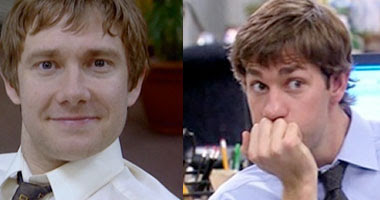 The voice of reason in The Office world. He allows you to recognize idiocracy with smarmy comments and the occasion look straight into the camera. Martin Freeman played Tim Canterbury in the UK version and though Tim claimed he had no ‘mates’, you just wanted to be his friend. John Krasinski plays Jim Halpert here in the states and when you manage to get past his tween hair cute you’ll notice that he’s been given the personality of his comb. His only noticeable trait is self righteous attitude he has towards everyone he works with. In a real office, he’d be the guy who eats lunch alone and would hear about the office bbqs on the Monday after. I think Krasinski is not being utilized as an actor in this role. I also think he needs adult hair. 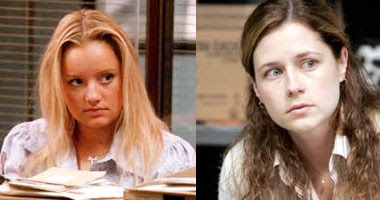 A great character creation. She is the girl in the office that you’d normally never really look at. But because you work with them on a daily basis, and occasionally you come to terms that you’re really not all that, you eventually hit on them out of convience. And because they generally aren’t THAT hot… you stand a chance. I’m going to call this one a push. Both Lucy Davis (Dawn Tinsley) and Jenna Fischer (Pam Beesly) handle the role well. Davis was a little more believable in her hatred towards her job but then, who really loves their job? So perhaps pretending you like it might just make you the better actor. 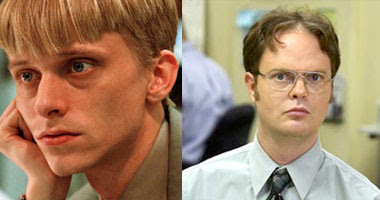 This one is a no brainer. Every office has that horrific social outcast. The one person who doesn’t fit in nor has not a clue to why they don’t. Gareth Keenan (Mackenzie Crook) cleverly captured this person and let us watch his torment as he was surrounded by those he just didn’t get. He was extremely believable in the role, down to his horrific haircut and oversized suits. Dwight Schrute (Rainn Wilson) is a sitcomy character that you’d expect to see as a walk-on character on Good Times. Every ounce of realism the original show had has been sucked out with a Dyson via Dwight. Suck power of 10. 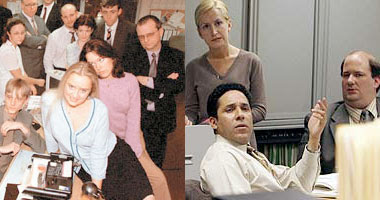 One major different between the two shows was the usage of background characters. The UK had ragtag group of accountants who other than Keith, you probably didn’t know their names. The US has Oscar, Kevin, Angela, Stanley, etc. Not only are they added to the storyline, but sometimes they are the stars of the episodes. I see the desire to highlight lessor characters as the expanded season limits to what you can do with your main people. But here is the saturation issue I brought up before. Let me focus on the people I want to see. I’d prefer not to have to watch a storyline about Angela’s cat calendar when I’m wondering if the branch is closing or not.

The US version gave a futile attempt at one of my favorite characters, Finch. Chris Finch (Ralph Ineson) was the man-love recipient of David Brent. He was rude, arrogant and familiar. He came in to the office, stirred it up and left it is a wake of mental filth. The US version used him few times as Todd Packer (David Koechner) is memorable episodes as… ummmm. When I don’t even remember what they did with him, but they left out a major source of humor and insight to the mind of Michael Scott. Maybe something that would help us care for Scott a little more. Gimme Finch, gimme gimme.

I can grip about how Brent’s boss Jennifer Taylor-Clark’s (Stirling Gallacher) creditability was wiped away by Scott’s boss Jan Levinson (Melora Hardin) due to the writers’ fear of losing another joke source, or just how the US version is so fearful of having any legitimate straight man. If it has a mouth, it needs to be spewing funny. Waste not, want not. Blah blah blah.

Anyone who watched a single episode of the original version might not figure out right away it was a scripted production. They might not figure it out all at. The US version is missing a laugh track and the occasional appearance of Alf.

Yes, I’m being harsh but it took 5 years for these feelings to incubate and finally surface. This was the season when I said I can watch no more. I don’t watch much television, so if I’m watching something it better be totally-wicked awesome. Like, The Office (UK)

Has Everyone Had Their Bob Dylan Today?Previous Article