The Three Stooges Trailer Has Finally Arrived. Is That A Good Thing? 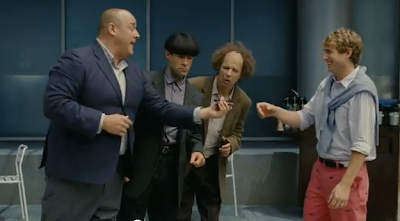 You’re either going to hate that they are remaking The Three Stooges, or you’re REALLY going to hate it. Such iconic humor done so raspedly. Or so this trailer tells us.

I enjoy the Farrelly Brothers’ films (to a point) and I can’t argue that the actors’ portrayals (Sean Hayes, Will Sasso, Chris Diamantopoulos) appears to be pretty dead on, but to attempt to place them in present day was probably not the best format for such a bold venture. Even more so to staple it to pop culture references like the iPhone (which probably will be around for a while) and Jersey Shore (which I pray daily will die in a fire) will only destroy any chance it having movie freshness down the road (much less its release date).

Listen, I don’t want this to be bad. I grew up a huge fan of The Three Stooges. I’ve also been hearing hype about this movie for over 2 years so I have ginormous expectations and little tolerance for lazy film making. (This means you Adam Sandler). So please let this movie make me look stupid for my opinion. (I told someone Titanic looked lame… I still hear about it today.)

Not that I expect James Cameron presents The Three Stooges.