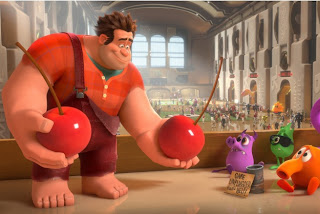 Generally I don’t get too excited when Disney tries to do something without Pixar, but from what I can tell, this was aaaaalllll then. And for once, I’m giddy.

An 8-bit video-game character attempts to shed his bad-guy image by escaping into a popular first-person shooter, but inadvertently wreaks havoc in the video-game universe by freeing a digital villain.

How To Do The Moon WalkPrevious Article