Almost a year ago I moved into my new house. Beyond a few boxes and beds, I had very little furniture. That day I raced out to buy a couch, it was rushed purchase for me since I usually need days if not weeks to find a piece of furniture to sparks my interest. But the hardwood floors were a big deciding factor when it came to figuring out where I’d sit.

Since then I’ve slowly been filling my home. Kitchen table, shelving, new giant chair. Every month I get a little closer to being a real person. I’m not married, nor do I live with a significant other so not only was there no rush, there was no one helping or directing me in these decisions. I get to wait until I see that ONE thing… then get it.

So far the most difficult part has been finding the thing that brings it all together, the coffee table. I have looked everywhere for my knight in shining lacquered wood. The center to my man room. That perfect coffee table.

Last week I found a table on Craigslist that really stood out. But it was not only NOT a coffee table, it not even a regular table. It was a game table. Where in the world would I put this awesome piece? (note to readers: I don’t have a game room).

But wait… if I cut the legs off this sucker I may have found the thing I’ve been looking for! It’s perfect.

I checked with my daughter who gave a “I guess” and I called the sellers.

“We still have it”

“I’m on my way!” (please note between first contact and me going to get it was actually 3 days)

With cash in hand I drove across town giddy as a school girl. Reached their house, knocked on the door.

And here’s where it begins.

The door opened immediately after I knocked. And by open I mean less than a two inch gap where a women’s face slightly appeared.

“He’ll meet you at the garage.”

I walked to the garage, waited a minute, the door opened. There I see it. The game table which actually seemed MORE perfect in person (how could this be? It’s like bacon on bacon!)

A man appears. He looks slightly defeated. He shakes my hand and asks if I wanted to see it. Of course we all know how dumb that question is but strangers don’t always know what to say to each other.

He immediately told me the story of how he found it. How it was at an estate sale and for him, just like me, it was love at first sight.

How each house move he quickly found a new place to display it. Each time told as if he was telling stories of his child’s first step. I could see the sparkle in his eyes.

I didn’t want to talk him out of selling it to me, but with that much love I had to ask “why are you selling it?”

He looked towards the door leading into his house and said “she’s making me.”

He said for the last few months it’s been in the garage (step one to losing your things) but now she feels it’s officially time to go. The smile was off his face. He tone stale.

Like a fool I told him my plans. You would have thought I was pulling the legs off his first born.

He physically stepped back. “You’re cutting off the legs?”

Years of improv kicked in

“No, actually not now that I see it in person. It’s actually just the size I need.”

Turns out I was asking the question to the wrong person. He put down his head and said he’d check. He had to ask the person who didn’t own it, didn’t want it and didn’t deserve the cash earned from it.

He came back a few minutes later after a fairly loud discussion was overheard by me through their garage firewall.

I handed him the cash and we carried it to my car. I was happy… but there was something going through my mind.

This coffee table represents every horrible about marriage.  Here you have a man who finds something he loves. Maybe the one piece of furniture in his whole home he actually cared about. I can tell you he didn’t pick out his dishes, bedding, towels, or maybe even a single item in his house. He would never tell his wife he didn’t like the punch bowl and force her to sell it. Yet he is giving up something close to him, for her. And his instructions for doing so? “Take this item which I hate, and don’t want you to have, and selling it for as much money as you can, or else.”

You can’t have this, so get rid of it and bring me a reward.

I actually got a little angry. More than I should have.

Until I got home cut off the legs, and placed it nicely in my living room. 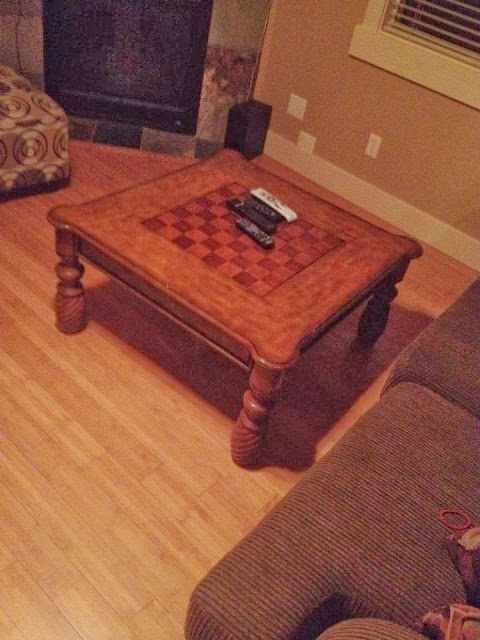