Open Letter to The Walking Dead 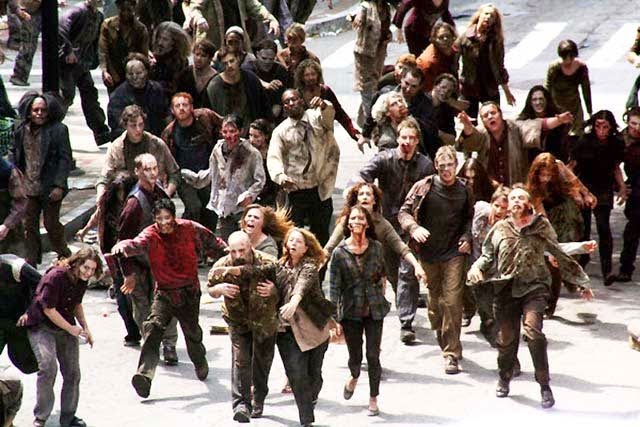 Like most of us, I watch The Walking Dead. It’s based partially on my love for the horror genre and my desire to absorb anything AMC does into my system. I remember the days prior to the series premiere and the high hopes I had for this new show.
I mean, it’s Zombies. How can they go wrong?
Well, now I know.
Before you read any further, if you’re not caught up on the series… and by caught up I mean haven’t watched every episode that’s fricken aired… then read no further. Unless my writing is so damn titillating that you just can’t resist.
Now with that, here’s everything I deem crappy about The Walking Dead.
I could go season by season and tear apart characters, story lines, logic even when it’s Zombie related but I won’t
Wait… I will. Somewhat.
But not in that order.  I’d like to get to the dead meat of the conversations and talk Zombies. Let’s see if some questions can be answered? First off, can they run or can’t they? Because I’ve seen them sprint in episodes. Rick barely escaped running Zombies in the first season, now you’d have to be a toddler to get captured. At what point did the writers take off the Zombie’s Nikes and decide it was time to stick to the name of the show?
Can you get infected by blood or not? Let’s go back to season one. “Don’t get their blood on you” Rick says as he’s covered with safety gear to trick the scent-capturing Zombies.
[Note – Rick also said he’d one day tell his wife and family the name of the Zombie they chopped up to honor him… still waiting Rick]
In that same scene, several characters managed to get blood on them. Since then, a character can’t kill a Zombie without getting blood in their mouth and they aren’t even stricken with some mild diarrhea.
Scratch. Apparently this WAS an issue, but no longer. Last season characters were pushing up the fence against a heard of dead, no one at this point was worried about the location of the antibacterial soap. I’ve seen characters pretty much cuddle with Zombies just to get a knife in their skull. Yet no one has been infected by a good fingernail to the armpit.
Slow Zombies can’t getcha with a scratch or a good bloody-flesh wound. Okay… logic changed again.
Also I quickly need to bring up the strength issues. Zombies aren’t strong enough over power 12 year old girls but can manage to open your stomach in a single tear. Let’s pick a standard.
Now we have issues like driving a new 2013 car after a 2010 apocalypse, everywhere you go lawns are mowed, every house they enter was just dusted, Daryl won’t give up that slow-ass reloading crossbow. But that’s not the main issue.
Here’s my MAIN issue.
When are the Zombies, the same Zombies the show is named after, going to be the actual villains?
I’ve sat through some crappy story-lines waiting for the pay off. I’ve watched 3 episodes of sappy drama to one mildly story-changing action.  I’ve watched them introduce characters just to kill them off episodes later.  And now I’ve seen the latest of villains introduced in the last Season Finale. Another mild-looking Caucasian male.
Forget the graphic novel I haven’t read, or the playbook you took from LOST. Let’s focus on the name again. The Walking Dead. Shouldn’t these guys be the true villains? Shouldn’t they be the ones people fall asleep fearing? The show has made them at the same nuisance level as the homeless people at the Santa Monica Pier.
The name dammit… the name! Imagine if Alfred Hitchcock gave us a movie called The Bird based on a group of people who couldn’t get a long and started killing each other, while a bunch of inconvenient birds kept pooping everywhere.
I am begging you to stop focusing on the novel. Obviously it has no biblical standards due to the characters you’ve killed off that were still prominent in the comics.
Make it scary again. Make me freak when a Zombie appears. I want to think that each time someone enters a house full of dead people, we’re going to lose someone good, or Carl.
Make me love The Walking Dead again. Purdy please.